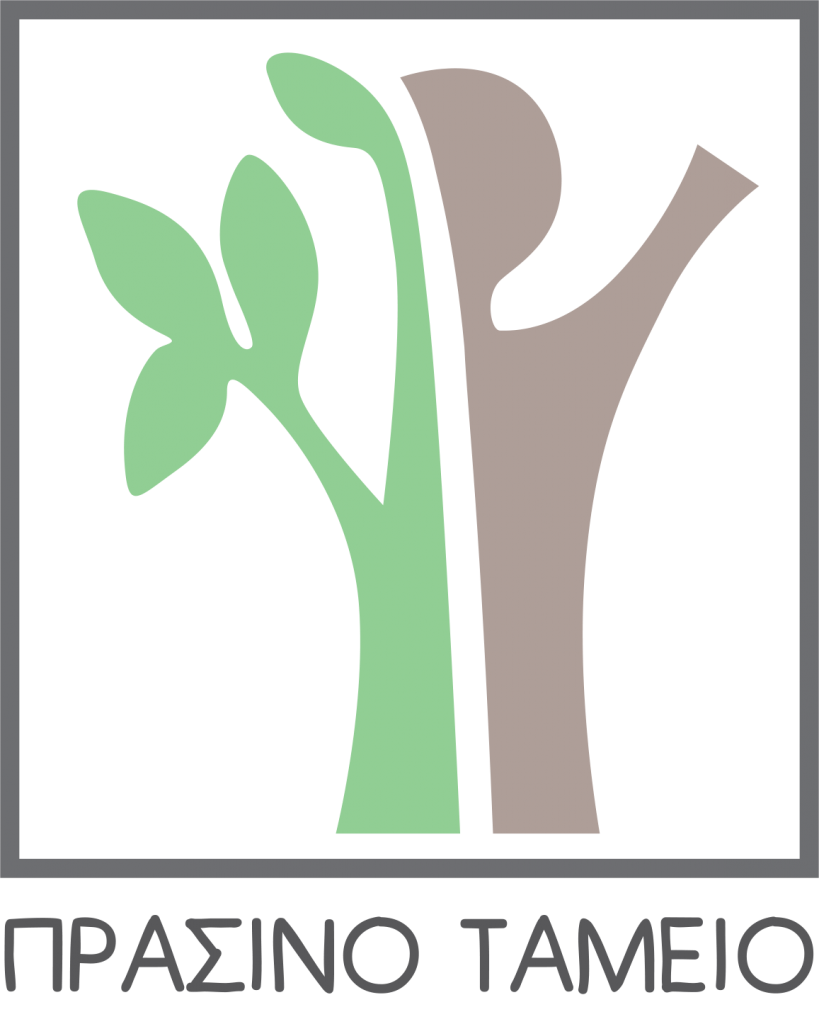 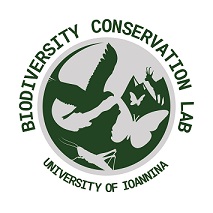 It is not by coincidence that the biodiversity crisis era happens at the same time with the most explosive road sprawl in human history. With the length of paved roads projected to increase at a magnitude of 60% by 2050, road sprawl is a key driver triggering or accelerating land use change, which is recognized to be the top threat for biodiversity decline globally and in the EU. On one hand, road infrastructure is known to promote economic growth and human welfare, but on the other hand it causes land use change, fragmentation, increase of artificial land, chemical pollution, hydrological disruption, soil erosion, acceleration of biological invasions, animal mortality, overexploitation of natural resources and other often irreversible negative impacts to wildlife and ecosystem functioning. Humanity is dependent on biodiversity and ecosystem services and hence threatened by their collapse. The conservation of roadless areas (RAs) is recognized as a cost-effective and efficient tool to preserve biodiversity and its benefits for humans.

According to a recent report of the European Environmental Agency, Greece is less fragmented than the rest of Europe but presents higher rates of fragmentation increase. We evaluate the fragmentation intensity of Greece in terms of RAs number and extend. RAs are those land patches over 1 km2 that are at least 1 km away from the nearest road. We work in the science-policy interface suggesting the legal conservation of large RAs and roadless islands are wilderness areas of high ecological, natural and aesthetic value that they should be preserved from degradation and fragmentation.

Description: The dataset presents the roadless areas (RAs) of Greece (2/2020) in kmz format (Google Earth).  RAs are defined as those land patches of a size greater than 1 sq.km that are at least 1 km away from the nearest road. The dataset pinpoints the 1.115 RAs, accounting for 4.99% of the Greek land. The map includes high and medium confidence data. Red polygons indicate the RAs with an area ≥50 sq.km (high confidence data). They cover 0.51% of the Greek land and are located in six remote mountains: Lefka Ori, Timfi, Olympos, Taygetos, Saos, and Smolikas. The present database is the output of ROADLESS project. It was used by the Greek government to set up the “untrodden mountain” legislation, offering protection to all large roadless areas (apart from Olympos that is protected under a recent Presidential Decree), plus a smaller roadless area (Hatzi mountain). Orange polygons indicate the RAs with an area 1-50 sq.km and are of medium confidence, because their roads are not fully digitized. They are currently updated under NATLAND project, and within 2022 a full database of high confidence data will be available. [Open access database]. 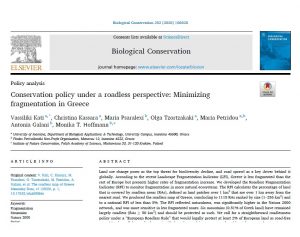 Abstract: Land use change poses as the top threat for biodiversity decline, and road sprawl as a key driver behind it globally. According to the recent Landscape Fragmentation Indicator (LFI), Greece is less fragmented than the rest of Europe but presents higher rates of fragmentation increase. We developed the Roadless Fragmentation Indicator (RFI) to monitor fragmentation in more natural ecosystems. The RFI calculates the percentage of land that is covered by roadless areas (RAs), defined as land patches over 1 km2 that are over 1 km away from the nearest road. We produced the roadless map of Greece, concluding to 1115 RAs ranked by size (1–256 km2) and to a national RFI of less than 5%. The RFI reflected naturalness, was significantly higher in the Natura 2000 network, and was more sensitive in less fragmented zones. Six mountains (0.51% of Greek land) have remained largely roadless (RAs ≥ 50 km2) and should be protected as such. We call for a straightforward roadlessness policy under a “European Roadless Rule” that would legally protect at least 2% of European land as road-free area. We also call for no further unjustified road sprawl in more natural and least fragmented ecosystems, as a measure to be integrated in all sectors of EU policy and particularly in the spatial planning of development projects. We recommend a five-step roadlessness guideline to be implemented in the European Union, including Greece, as a measure to effectively address biodiversity decline.

Abstract: Balkan chamois (Rupicapra rupicapra balcanica) is a protected species with an Inadequate-Bad (U2) conservation status in Greece. Our study explores its seasonal range use pattern, demography and habitat selection in a site of the Natura 2000 network, Timfi Mountain. To this aim, we examined 1168 observations obtained from six seasonal surveys (2002: four seasons, 2014 and 2017: autumn) and performed an ecological-niche factor analysis (ENFA), using 16 environmental and human-disturbance variables. The species had an annual range of 6491 ha (25% of the study area), followed the typical range-use pattern, and presented the minimum core area during the rutting season (autumn). Timfi Mt hosted 469 individuals in 2017 (the largest population in Greece), increasing by 3.55 times since 2002. The species selected higher altitudes during summer and autumn, pinewoods over broad-leaved woods as winter grounds, and it avoided south-facing slopes. Our results supported the anthropogenic risk avoidance hypothesis; the species always selected remote areas away from roads, human settlements, and hunting grounds. In Greece, 40% of its distribution area falls within hunting ban areas (16.5% of the country). A national conservation policy is needed towards maintaining and increasing roadless areas and hunting-ban areas within Balkan chamois range nationwide. [Open access publication]. 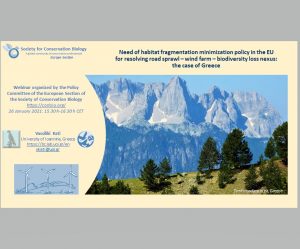 The goal of the webinar was : (A) to present the road sprawl and subsequent fragmentation problem at global and European scale, as roadless areas conservation is a long-term initiative of PC SCB-Europe. (B) to present the topical nexus of biodiversity loss and land-use change stemming from Renewable Energy Sources, such as windfarm infrastructures, rapidly developing in the EU under the European Green Deal. (C) To present the relevant legislative and policy frame at global and EU scale and discuss the perspectives of integrating the webinar messages into the EU policy and legal frame. The webinar was not open to the public, but under invitation of key EU experts and policymakers. The two main messages of the webinar were: Message 1: Restrain road sprawl and land take in natural ecosystems in legally binding terms. Message 2: Better integrate biodiversity in climate policies: prioritize RES in the least ecologically valuable zones. The following points were presented as questions/ points to consider for discussion by scientists and policymakers. 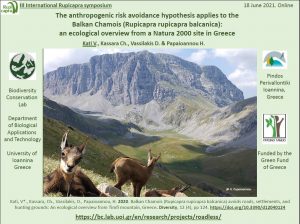 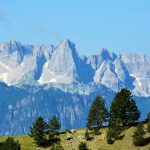 The map of the undisturbed areas of Greece (“Untrodden Mountains”)

RA: The Roadless Area is any land patch (polygon> 1 sq.km.) that is at least one kilometer away from the nearest road. Each Undisturbed Natural

Roadless areas will be legally protected. Greece shows the way to Europe

Europe is the most fragmented continent in the world by roads and artificial surfaces. According to the latest report by the Commission and the European

BCL presentation in the III International Rupicapra Symposium, Croatia 16-18 June 2021. What are its distribution and population trend? Which areas does it choose and

The research of BCL on Roadless Areas in a letter from the SCB to Frans Timmermans, Executive Vice-President of the European Commission

The Roadless Areas in the National TV-“Green stories”

The long-term international scientific effort for the preservation of the last virgin regions of the Planet as Roadless Areas is presented, through the magic lens

Video for roadless Areas of Greece 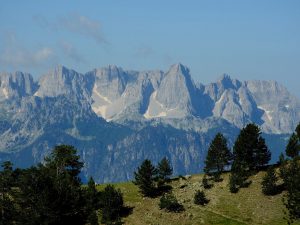 2021: Towards a new European and national policy of hampering road sprawl

This section lists articles of the international or national/ local press referring to the scientific findings of our research. The articles are indicative and are quoted without necessarily reflecting the opinion of BCL.