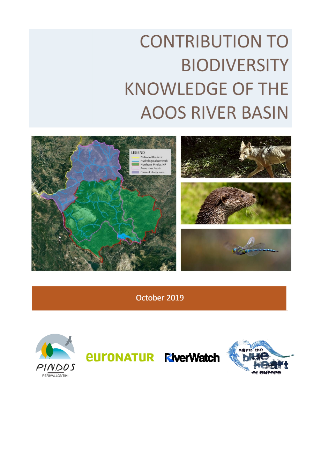 The Vjosa/Aoos river still flows freely from the Pindus mountains in Greece, to the river mouth in Albania largely without artificial obstacles. The river stretches for 270km in total and 70km are flowing within the Greek area. Downstream of the Pigai dam in Greece (10km from the springs of Aoos), the river is near natural, representing all types of river ecosystems, including canyon sections, braided parts and meandering stretches. In Greece the protected area, that partly includes river Aoos, belongs to the Northern Pindos National Park. The existing National Park is already protecting 50kms of Aoos’ river stretch, leaving nearly 20km of the river unprotected, towards the GR-AL borders (see Map 1). At the same time one of the major tributaries, Voidomatis (15km long) is included in the existing National Park, leaving 6km of the tributary unprotected, towards the GR-AL borders. Another major tributary, river Sarantaporos (50km long), stretches under no protection zone, from its springs until its confluence with Aoos, right upon the GR-AL borders. Voidomatis and Sarandaporos rivers are the main tributaries of Aoos. Voidomatis meets up with Aoos in the plain of Konitsa, and Sarandaporos joins them right on the Greek-Albanian border. Through this year’s biodiversity research, we aim to increase the biodiversity knowledge for the unprotected area of the Aoos river basin, in order to further support the efforts of the campaign for the expansion of the Aoos’ protected area towards the GR-AL borders, in a way that will include the unprotected stretches of Aoos and its major tributaries (Voidomatis, Sarantaporos). The present study is focusing on insect species related to water (Odonata), as well as on large mammals, either directly related to the riverine ecosystems (otter) or indirectly (carnivores and ungulates). The present biodiversity research sets four distinct objectives: 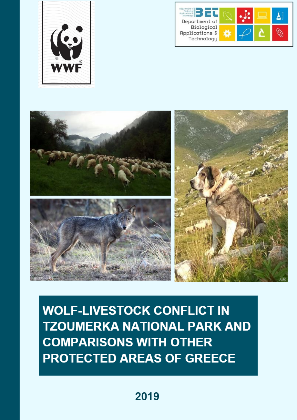 Livestock depredation is one of the main wolf-human conflict issues both in Europe and worldwide. The aim of the project is to study and evaluate wolf-livestock conflicts in Tzoumerka NP and to compare our findings with other protected areas in Greece. We have in particular set the following six research objectives: 1. To assess and describe traditional free-ranging livestock raisers’ profile in Tzoumerka NP. 2. To record wolf depredation levels on cattle, sheep and goat herds as the main baseline metric of wolf-human conflicts in Tzoumerka NP. 3. To identify and evaluate the principal damage prevention methods adopted by local livestock farmers in Tzoumerka NP. 4. To assess levels of livestock guarding dog mortality due to the illegal use of poisoned baits as a major conservation problem in the area in Tzoumerka NP. 5. To evaluate satisfaction levels of livestock farmers regarding the national compensation system in Tzoumerka NP. 6. To compare the main results stemming from Tzoumerka NP with other similar studies previously completed in other protected areas and draw relevant conclusions. © 2019 University of Ioannina and WWF Greece 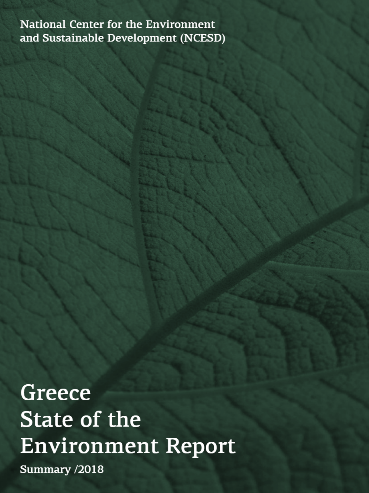 We present here the English summary of the full technical report (in Greek) concerning the state of nature and biodiversity in Greece in terms of 12 indicators. The state of nature and biodiversity generally appears to be sufficient compared to the rest of Europe, as the indicators used in this report have shown. The country has made notable progress in biodiversity and geodiversity conservation through the establishment of a network of protected areas. However, the Greek State should prioritize the implementation of joint actions and policies in the following sectors: (a) In the construction and development sector, natural and semi-natural land take should be diminished; (b) In transport, road network expansion should be minimized in order to halt landscape and natural ecosystem fragmentation; (c) For woodland and forests, special conservation actions should be applied aiming to maintain their area, to restrict pressures and threats within their boundaries and to establish woodland bird monitoring and conservation schemes. Further actions and policy measures should target at improving the conservation status of species and habitats of community interest, primarily through the restriction of pressures and threats on vulnerable biological groups, emphasizing marine ecosystems. Moreover, it is very important to bring into effect effective policies for minimizing the ecological debt and, in particular, fossil fuel use in the country. Finally, joint initiatives are needed in order to enact formal legal protection of geodiversity.